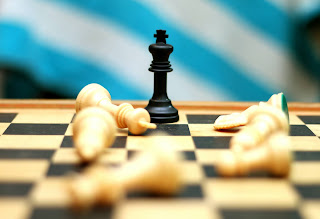 The start of a chess game there is a race to develop your pieces. Your pieces are the key to playing a great chess game. When the pieces are properly developed, they work in harmony to create attacks and provide defense. Good development grants a smooth calculated relentless attack early in the game. During the romantic era of chess, development was everything. The sacrificing a pawn or two pawns and maybe a minor piece for development was common.

"Romantic chess was the style of chess prevalent from the late 15th century until the 1880s. Chess games of this period emphasized quick, tactical maneuvers rather than long-term strategic planning."

Traditionally every chess player has heard to move their E pawn or D pawn first to develop. Most common openings are centered around moving the E pawn or D pawn first. Chess players will navigate through opening book lines and variations to the point of memorizing. Comparing the lines of play to games of amateurs and grandmasters. Unfortunately, you will not learn development in this process.

"What is development? Development is to manage your tempo and initiative."

If you understand development is managing tempo and initiative. It does not matter what openings you choose to play. When you get good at it, it rolls over into your middlegame and endgame positions. The tactics happen more frequently.

In the definition I include the word "manage" because it takes effort. Learning how to manage your tempo through development grants you initiative. With initiative is how you win games early, guiding your opponent to resignation or checkmate. However, if your opponent finds the correct moves and answers the gauntlet of initiative correctly, you will be granted a playable middlegame.

Now the good part... How do we learn tempo and initiative?

First Method: Play Gambits!
Playing gambits help you to understand the value of a sacrifice. Understanding the sacked piece or pawn. When you sack a piece, you are getting your opponent to use their move to capture instead of using their move to develop. In which you are increasing your tempo and space. We can see this clearly in the Danish Gambit. White sacks two pawns for a clear development with attacking possibilities. In the Scotch Gambit white sacks one pawn for development. The Cochrane Gambit and Muzio Gambit white sacks a minor piece to expose the king. All these sacrifices are about gaining space with tempo and attacking possibilities, early in the game.

Second Method: Understand Opening Principles
You must learn the principles to know when to break the principles. Almost every beginner chess player has heard knights before bishops, do not move your queen out early and do not move the same piece twice, etc. You must question what these principles really mean and understand them. There are a lot more and too much to cover here. (For reference “30 rules of chess” by Reuben Fine) Regardless, one must understand each principle as an individual to the point when it would be permissible to break the rule. For Example: Do not move the queen out early. What does this mean? Moving the queen out early allows your opponent to attack the queen while developing their own pieces. But this happens in the Scandinavian Defense. Why? Because moving the Queen to the key square A5 grants safety and there are no more attacks on the queen.

Playing blitz, I find to be fascinating and fun. What I recommend is to play blitz as a training method. When you play blitz with no intention you could be wasting time. Chess is a game to be enjoyed and if blitz works for you so be it. Trying out various ideas and principles. Here is how we can use blitz as a training tool. Play the same opening over and over. Do not change it no matter if you lose every game or win every game. You are now learning the opening in real time. How many times have we said “the opponent never plays the opening line in the chess book”; After many game of blitz you will discover this very quickly.
Posted by Shoreview Chess at 7:08 PM No comments: